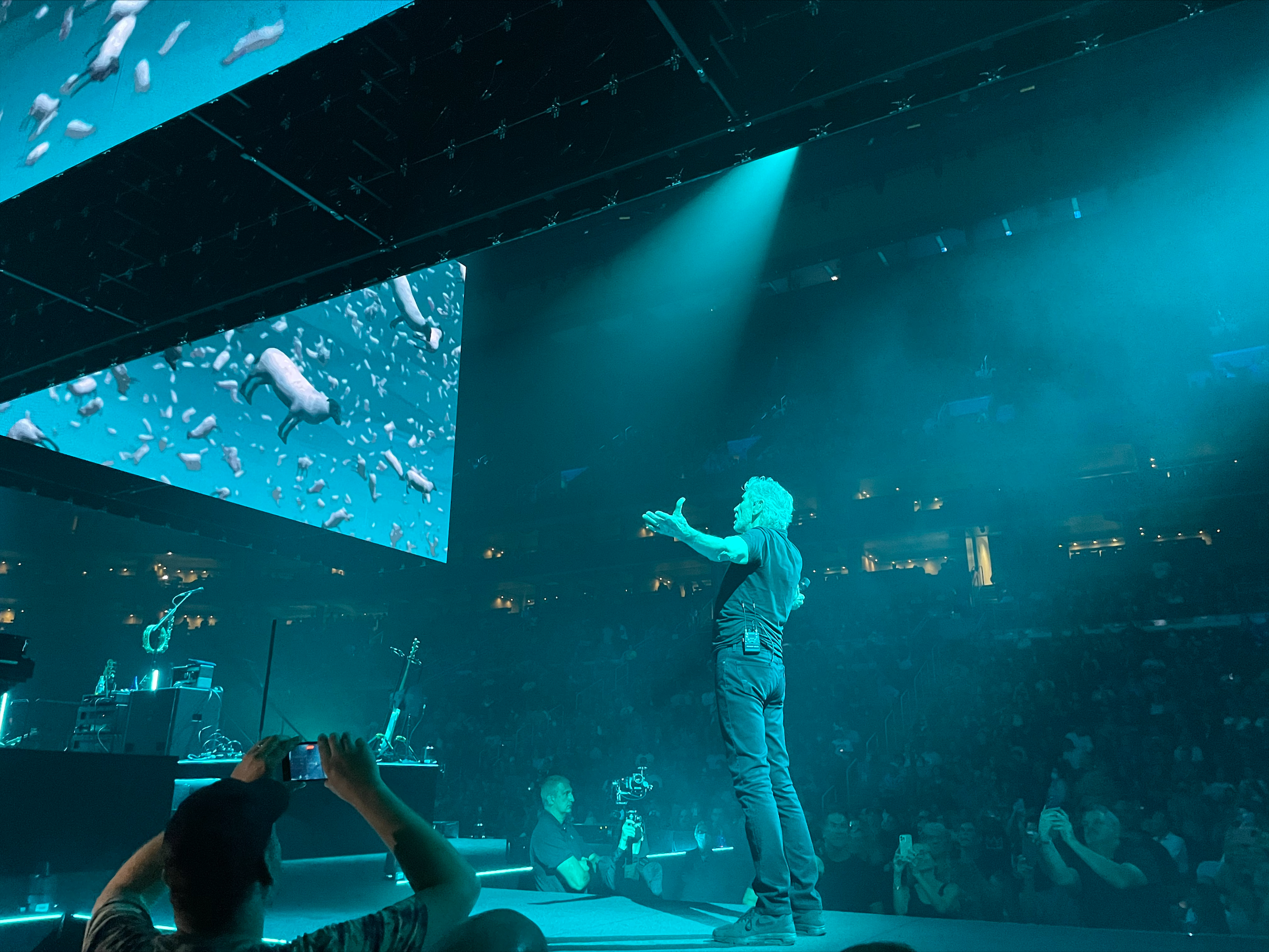 English Review: Roger Waters, “This is Not a Drill,” live in North America 2022

The concert opens as a requiem, a slow, naked and distressing version of “Comfortably Numb”, with the screens lowered on the central stage hiding the musicians and separating them from the audience; it is impossible to be distracted from the bleak images of a destroyed metropolis, with men wandering like shadows among the rubbles. There is also no room for the catharsis of the solo, “THE” guitar solo, but only for the sad wailing of the backing singers, we finally managed to destroy everything, to become so numb not to understand that our life is not a drill and that when the dream is gone only rubble remains.

The curtain of screens rises revealing the stage with the musicians, it is a perfect machine, built on the contrast between sharp and brilliant digital images and the intimate atmosphere of a bare stage, between rock songs, and, predominantly on this tour, other acoustic and confidential ones.
Waters and Sean Evans, who conceived the show, created a perfect combination of music, lights, videos, written messages, which bombards the senses and unleashes continuous emotions: we laugh, sing, think, dance and cry.

Roger Waters moves between the four ends of the stage, offering to everyone a front row seat and a close encounter with rock’s most angry, divisive and controversial pacifist, a unique author and entertainer with many contradictions, real or perceived, but never banal and definitely not ready to step aside yet.
He makes it clear, between the ironic and the combative, with a message before the concert, “if you’re one of those I love Pink Floyd but can’t stand Roger’s politics people, you can fuck off to the bar now.” It is not a matter of preventing the public from thinking differently, but of claiming his freedom to continue to center his shows on those humanitarian and political messages that have been part of his artistic identity, with Pink Floyd or alone, for at least fifty years.

The set list takes us through causes, effects and solutions. There are the despotic pieces from “The Wall”, the “relatively” powers that be that tried to ruin us in school and then the “powers that be” that want to determine our lives, that kill and dominate people with the bravery of being three thousand miles away; but there are also intimate moments when hope resurfaces. A Bar, “different from the one before”, where all those who are like minded and want to discuss liberty and human rights can meet, a long flashback built between “Have a Cigar”, “Wish You Were Here” and “Shine on You Crazy Diamond” with two memories (one linked to Syd, one to the recordings of “Wish You Were Here”) that leave with teared eyes and a knot in the stomach that only the liberating ride at the end of “Sheep” can untie.

The chant “Hammer, Hammer” raises during the interval and becomes unbearable, introducing the fascist/Nazi/dictatorial gathering of “In The Flesh” and “Run Like Hell”, but the horror of more unnecessary deaths projected on giant screens is immediately balanced by an extended version of “Deja Vu’” that talks about human rights, tolerance and the support of the Palestine cause.

This alternation continues with classics from “The Dark Side of The Moon”, “Any Color You Like” which becomes a hymn to diversity and inclusion, while “Brain Damage” and “Eclipse” reserve for the audience the visually most spectacular moment of the show.

The circle could close with “Two Suns In The Sunset”, the nuclear holocaust, but Waters fades back again on the positive, reprising “The Bar” and connecting it to “Outside The Wall”: there is still hope, we still have a choice between rubbles or a better world.

As the screens go down again and the musicians leave the arena playing among the audience, the curtain falls not only on yet another proof of artistic vitality of a man now close his eighties, but also on the vision of rock concerts as total and emotionally engaging experiences that did not exist before him and will no longer exist after.